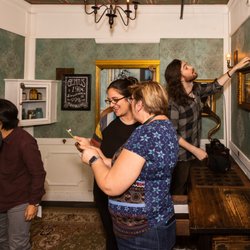 San Francisco locals are raving about the awesome escape rooms in the bay area, it’s an awesome activity to go out and do that can give friends or families time to bond with one another. This activity forces players to use their physical and mental strength to escape a themed room. The games involve players solving riddles by using clues or hints left around the room or multiple rooms they have been “trapped in” or strategy to win the game.

This amazingly adventurous activity is basically like a video game brought to life and attracts all different types of people, from nerds to adventurers. The concept of escape rooms was originally proposed in Japan and since its introduction, the activity has attracted the attention of individuals in major cities all around the world. Even though all escape rooms aren’t the same, they all have three major things in common, teamwork, immersion and a theme and story.

The title of the best escape room san francisco ca belong to the Palace Games, the highest-rated escape game spot, is ranked five stars on Yelp out of its 319 reviews. Players are greeted with a team of friendly staff, rewarding brain teasers and puzzles and high production values. People from all over have even labeled them the best escape room in CA.

The Palace Games resides in what was once an old Exploratorium building, offering three rooms known as the Great Houdini Escape Room, the Roosevelt Escape room and the Eddison Escape room. Considered to be the most demanding escape room games in the San Francisco area for their difficulty level, the rooms have even been rated the best in the country as well, hosting people who travel from different states in the United States just to try out the rooms for themselves.

In the Eddison, Room theme involves Thomas Eddison requesting the presence of the players in his office where he has constructed a challenge for them. The room is filled with an arrangement of sensors, lights, and surprises and should be played with a team of around 5-6 people but make no mistake, this escape room is not at all for beginners. Although this is a sequel to the Houdini room you do not have to play them in a certain order.

The next room, created in 2016, known as the Roosevelt Escape Room revolves around the idea that Theodore Roosevelt is collecting some of the brightest minds to complete an important task. This escape room is packed with fun physical puzzles and is completely fully automated with a more linear style.

Players have to work together physically to help solve certain puzzles. This complex escape room is not a good place for beginners to start with since at times team members have to split up. It is recommended to bring 6-8 players when tackling this escape room but if the team members are less experienced players have the option to bring more people.

The last room at Palace Games is the Houdini Escape room and the theme is that Harry Houdini built a contraption inside of the Palace to be decoded by 8 great American Innovators. This room is fully automated and made with a complex system of Arduinos and sensors creating a magical experience for players. This room is also not for beginners and should be played with a group of 6-8 enthusiasts. This game lasts around 80 minutes and has plenty of puzzles for everyone involved to solve. Although a little costly, these games offer an experience of a lifetime with games that range from 80-100 minutes.

India’s push to power up their vehicles